Acoustic instruments such as tuning forks and crystal or Tibetan bowls are widely used in sound healing in a variety of different ways. One of the best known tuning fork practices is called Acutonics, a system developed by an acupuncturist, that uses vibrating weighted tuning forks on acupuncture points. It works on the same premise as acupuncture – that stimulation of these particular areas unblocks stuck or stagnant energy, improving energy flow through the body and supporting the body in healing itself. Acutonics is used in a variety of settings including some hospitals.

Crystal and Tibetan bowls are struck or rubbed to produce pure, penetrating tones, not very different from tuning forks. Metal bowls have been used in Tibet for centuries as an aid to meditation, while crystal bowls are a relatively recent development but the two are used similarly. Dr. Mitchell Gaynor, an oncologist and author of The Healing Power of Sound (2002), began integrating music, vocalization, breathing, bowls and meditation techniques in his work with patients in 1991, after first being exposed to a Tibetan bowl through one of his patients. He has observed many beneficial outcomes as a result of this integration.

The use of tuning forks, bowls and gongs, along with certain types of music appears to stimulate the relaxation response in the body. This may be due in part to the biological process of Nitric Oxide (NO) release in the body. According to John Beaulieu, tuning fork expert and one of the authors of Sound Therapy Induced Relaxation: Down Regulating Stress Processes and Pathologies (2003), NO appears to be released in the presence of certain music and sounds. According to Beaulieu, nitric oxide is not only an immune, vascular, and neural signaling molecule, it is also “antibacterial, antiviral, and it down-regulates endothelial and immunocyte activation and adherence, thus performing vital physiological activities including vasodilation” (Salamon et al. 2003)…. Eileen McKusick

Entrainment was first discovered in 1665 by Dutch scientist Christian Huygens. He set up a room full of pendulum clocks with their pendulums swinging at slightly different times. When he returned to the room the next day, he found the sway of the pendulums had all synchronized.

As gongs and singing bowls are sounded, the powerful rhythmic vibrations resonate throughout the body.  The sound of these harmonic vibrations stimulates the alpha and theta brain waves associated with deep meditative and peaceful states that are highly conducive to healing. They also slow down the heart and respiratory rate, creating a therapeutic effect upon mind and body. When the brain waves and body are synchronized, balance can be restored and stress released. 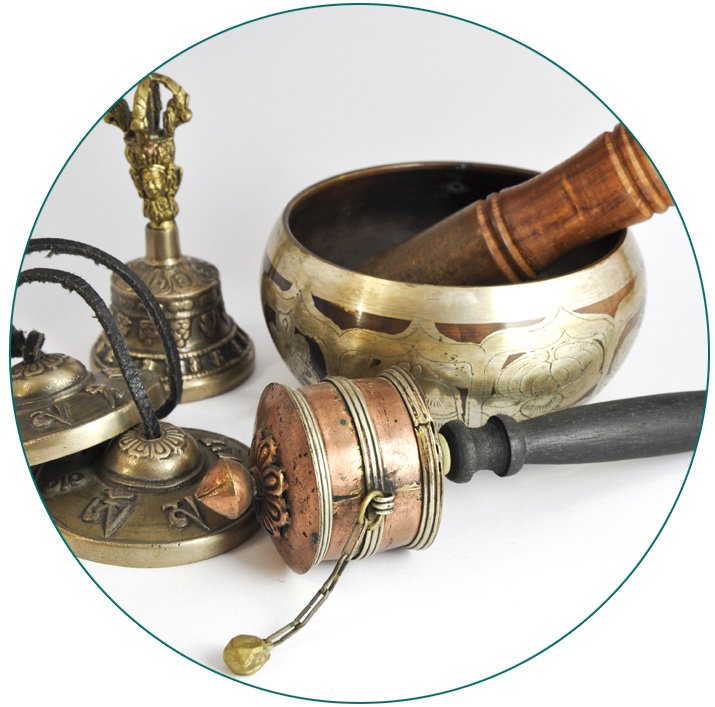 A Sound Lounge or Table has powerful low frequency speakers mounted on the bottom. The lounge/table itself acts like a speaker sending healing low frequency vibrations throughout every cell of your body. Sound tables are used in vibroacoustic therapies, which are treatment methods based on the combined effects of music and low frequency sound vibration. Auditory and vibratory stimulations are applied to the body to achieve physical and psychological results.

Research from many hospitals and universities has proven the stress reduction benefits of listening to relaxing music. When using a sound lounge/table, music is not only heard through the ear, but delivered to the body directly, vibrating every part inside and out -- cells, muscles, tendons, and organs, as well as nerves, spinal cord, and areas of the brain and brain stem. This opens the possibility of direct cellular stimulation and a deeper whole-body response. Sound lounges/tables transmit powerful, healing low frequencies through the body that are both relaxing and invigorating at the same time.

Therapeutic Sound (Programmed specifically for the sound table) – Through Kate's studies of ancient cultures and writings, she discovered frequencies that are related to deep relief in the physical body and release of long term stress. In order to accomplish turning the frequencies into music, Kate connected with one of the scientists that worked on the Hubbell Telescope recording sounds in space. This connection was important as Kate needed to acquire the equipment possible to recreate the complex frequencies. The next step was to find a way for the client/patient to feel the vibration of the frequency while simultaneously listening to it. Speakers have been added to the table, giving the client an all-encompassing experience. This treatment is not for everyone. It is a very intense process and discussed with the practitioner before a session. Time suggested on table is 36 minutes.